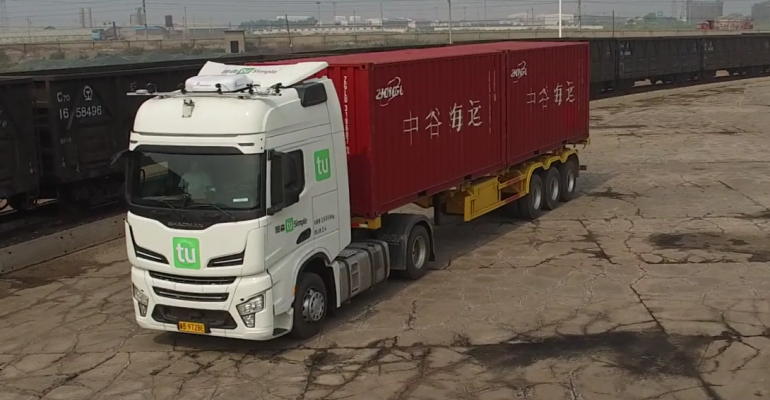 China has made significant strides in port transportation by using self-driving trucks to transport containers at Zhuhai Port in Guangdong province.

Based on artificial intelligence technology developed by Shanghai-based startup Westwell Lab, the 18-meter-long vehicle can automatically navigate, calculate the best route, avoid barriers and deal with an emergency by slowing down, braking or taking a detour.

The domestically-made truck looks like a normal one but does not need any drivers. It is used to move containers between the stocking area and the container gantry crane at a standard speed of about 30 kilometers or 19 miles per hour.

Tan Limin, CEO of Westwell, said the self-driving truck is “nearly 100 percent safe”. Guided by the Beidou Navigation Satellite System, sensors and radars, it can reach an accuracy level of within two centimeters.

He said the self-driving technology for port transportation is more difficult than that for passenger vehicles as some roads in the container stocking area are almost the same width as that of a truck. This makes navigation difficult, even for experienced drivers.

Transport advances are necessary at ports as container throughput at China’s ports has risen in recent years, putting immense strain on existing transport resources and drivers, he said.

The Downfall of Self-Driving Freight Transport In China

This technology-led growth would come at an economic cost. There are more than 16 million people in China who work as truck drivers and haul 76% of the freight volume across the vast length and breadth of the country.

It was calculated that based on a number of advantages like accident avoidance, fuel savings, congestion avoidance and improved productivity, the economy of the United States would benefit by $1.3 trillion if autonomous cars become mainstream. Most of these improvements like accident and congestion avoidance would come as a result of decreased dependence on humans, which might stand to reduce the number of jobs and partially reduce wages of Chinese truck drivers but they would also come as welcome relief to them as they toil hard to navigate across lengthy and often dangerous terrains.

Unemployment anxiety and economic advantages aside, drivers would still be required to be physically present in autonomous vehicles – the role would just be facilitated due to technology. Big international autonomous car driving technology firms like Tesla have announced plans to enter the trucking domain, as the advantages to every stakeholder involved would be high despite the number of jobs it might decrease in the long run.

However, the anxiety surrounding automation-led unemployment is unlikely to go away easily in the mind of the public, and the responses from either the Chinese government or relevant commercial companies haven’t been highly reassuring for many. One solution to mass layoffs is to move people out of labor intensive work, resettling them into more skills-based work like research and development. The option to resettle workers into other knowledge-led jobs is unlikely to suit truck drivers as they would either work in the trucking industry itself or be forced to make a complete industry change to find a job.

Since 1970, Cannonball Express Shipping Company has been providing top-of-the-line service at a reasonable rate. Based in Omaha, Nebraska, we provide nationwide refrigerated LTL services, as well as, local delivery services.